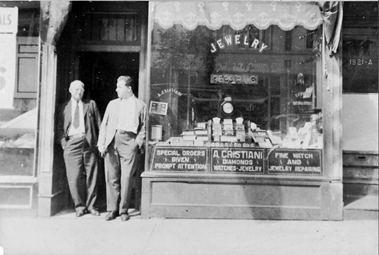 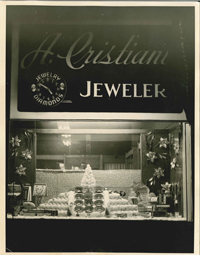 Amindo Cristiani, an emigrant from Italy, opened A. Cristiani Jeweler in Bronx, NY in the 1930's. A trained watch maker, Amindo taught his son, Michael (Mike), the watch and clock trade. Mike began his own career with Bulova Watch Company, and later was assigned to Midland, TX as a bombsight technician during World War II. After the war, Mike opened Cristiani's Jewelers in Midland in 1969. 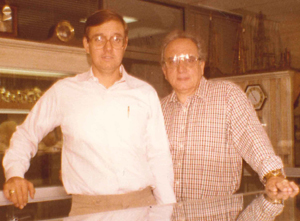 Like generations before, Mike's son, David, grew up in the family business. During college, he was a member of the Corps of Cadets at Texas A&M and graduated with an accounting degree. Later, he moved to Houston as the branch manager of a mortgage company. There, he met and married Carlene Patton, a UT graduate. In the mid-1970's, the oil boom created a growing economy in West Texas, so David returned to Midland to help his father with the family business. David and Carlene then had two daughters, Courtney and Paige. In 1993, upon Mike's retirement, David purchased the business in Midland. In the spring of 2005, David and Carlene opened a second location in Austin, TX, which is an appointment-only store. David commutes between the Midland and Austin locations, spending time in both stores every week. David's daughters, Courtney and Paige, now both work in the family business, managing the Austin location and the marketing and advertising initiatives. This local business truly is a family affair!

On our website, we use services (including from third-party providers) that help us to improve our online presence. The following categories of cookies are used by us and can be managed in the cookie settings. We need your consent before being able to use these services. Alternatively, you may click to refuse to consent, or access more detailed information and change your preferences before consenting. Your preferences will apply to this website only. You can change your preferences at any time by clearing your browser history/cache or visiting our privacy policy page.

By authorizing third-party services, you allow the placement and the reading of cookies and the use of tracking technologies required to keep our website reliable and secure.

Essential
These cookies are required to run available services and to provide basic shopping functions. These cookies are exempt from consent according to the exceptions provided by the Article 82 of Data Protection Act.
Personalization
These cookies provide a custom experience on our website.
Analytics and statistics
These cookies allow us to measure visitors' traffic. They help allow us to understand which products and actions are more popular than others.

Review and set your consent preferences for each partner below. Expand each partner list item for more information to help make your choice. Some personal data is processed without your consent, but you have the right to object.

You can find out more about which cookies we are using or switch them off in settings.